A two or four player game of basketball - with swearing!

With this game, I wanted to harken back to the heightened reality of sports games like NBA Jam, while taking the opportunity to exploring the look of comic book characters playing a real sport.

The visual style supports this experience through the use of comic book and cartoon tropes like speech bubbles, writing out a "sound effect" when players steal the ball, as well as the players kicking up dust as they run. The general visual style of the game also uses tropes like skewed perspective and outlines, making the characters look cut out.

Part of setting this sports game in a heightened reality was the use of double jumps, in order to allow players to balance the high floaty jumps with an ability to correct their trajectory in mid-air

In order to keep the jumps feeling balanced, however, the jump speed of the second jump is only 85% of the first jump's. This made sure that the double jump was used primarily in order to adjust one's position, while the player needs to use her first jump to set her general trajectory.

Players also jump higher when they don't have the ball, giving the defending players an advantage.

The first prototype of the game was very confused about its control scheme. For some reason I was very much into using the trigger buttons on the gamepad, but still needed to use the face buttons for things like dashing and stealing the ball.

It also seemed intuitive for me to have the run direction and the aim direction mapped to different thumbsticks, mush like in an FPS. However, after playtesting the game for a while, I decided to simplify the control scheme quite drastically. I also thought the game needed tan actual sight, indicating the direction of the impending shot, as well as the speed of that shot. 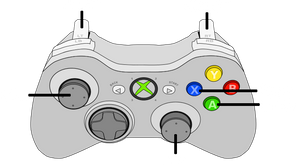 By only using the left thumbstick both for running as well as aiming, the controls felt a lot more fluent, since you are generally either running while on the grund, or aiming while in the air. Only using the 4 face buttons for the 4 different actions was also easier for players to learn, as well as easier for them to execute.

Furthermore, removing the sight indicating direction and speed of the shot, made the shooting feel much more intuitive. The mechanics of aiming by adjusting direction and speed, in order to accomplish shorter putt or a longer arc, still remained behind the scenes, but hiding it away visually also contributed to making the game look more like an actual sport, without any added "gamey" UI elements on top. 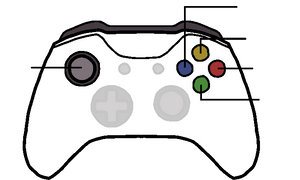 The game is possible to play as either 1-on-1 or 2-on-2. Behind the scenes, this also affects the jump heights for players. Jumps with the ball remain unchanged, but without the ball, players are able to jump 10% higher in 1-on-1 matches than in 2-on-2. This is to instead incentivize team work within the 2-player team, as the more efficient strategy is instead to pass the ball between players in order to get it to the hoop.

A future improvement to the game in this regard would to introduce the ability to dunk the ball from within a certain distance from the hoop. By only making this possible if the player trying to dunk had received the ball directly from her teammate and had caught the ball mid-air, while on her way to the hoop, this would further incentivize team play in the 2-on-2 game mode.