A two player game of dodgeball

Based on the simple elevator pitch of "dodgeball with shotguns", I set out to make a 2-player action/sports game, where you score points by shooting at huge dodgeballs to make them in turn hit your opponent.

The idea was to construct the game and its experience like an actual sport. This had several implications. Firstly, I didn't want players to be able to level up their players through play. I wanted this to be a skills-only game, where the only way to improve is by practicing your skill with the controller, learning to execute spectacular moves and outmaneuvering the opponent. This also required the dodgeballs themselves to be really big, in order to give players the ability to intentionally steer them by aiming their weapons at them.

Another implication was the rules of Second Amendment Dodgeball. Initially, I had intended for players to customize most of the basics of a match - the length of a match, numbers of balls in play, points required to win a match, etc. By limiting this to a strict ruleset (three minute matches, with an additional ball added every minute), I both limited the amount of work needed on my part, which probably enabled me to actually finish the game, as well as gave the sport of Second Amendment Dodgeball a definite ruleset that I as a designer feel gives its players the best possible experience.

Lastly, to help give the feeling of an actual sport being played, I decided to include statistics at the end of every match. It is intended as a catalyst for the heated post-match discussion and analysis, where the losing might have hit more of his fired shots, or the winner might have achieved victory without picking up a single powerup. This fuels the party-game feeling of the game, by giving its players something to argue over, in order to fuel the high-pitched mood the game intends to achieve.

CALCULATING THE START ANGLES OF THE DODGEBALLS

To determine the angle at which to start moving the ball when it's hit by one of the players' weapons, a point is chosen on the opposite side of the ball's sprite. A line going from the middle of the sprite and through this point is then used (via the move_towards_point function) to establish the starting angle of the ball. 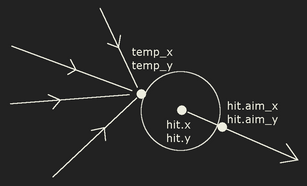 For players to be able to have more precision while aiming, there is an optional mode for aiming, where the sight of the character's weapon slowly moves towards the direction that the player is directing the joystick. This helped the player to slowly direct her aim toward the point she was aiming for.

Due to the quick-paced nature of the gameplay, however, most players choose not to engage this mode, as it requires the player to momentarily release the joystick back to the middle if she wants to rotate her aim 180 degrees.

During playtesting, many player complained about the aiming being slow, since they were waiting for the sight to rotate around the character when trying to rotate it 180 degrees, wasting several seconds of valuable playtime.

After setting the aim mode to have precision aiming set to off by default, these complaints completely ceased.

Players in playtest sessions also tended to keep to the edge of the playing field, trying to avoid being hit by dodgeballs from behind. In order to avoid players playing too defensively like this and to encourage them to instead take risks, I chose to implement random powerups. The rationale behind this being to encourage players to occasionally move towards the middle of the playing field.

The implemented powerups were:

The in-game music is meant to convey an 8-bit aesthetic in the vein of platforms like  the NES or the Commodore 64. I didn't go for a 1:1 emulation of the 8-bit audio chips, but rather a "pseudo-8-bit/8-bitish" sound, achieved by bitcrushing normal drum samples and using pure saw, triangle, or square waveforms for melodies and basslines, since these were the kind of waveforms available from the NES's and C64's audio chips.

All three in-game songs are quite high tempo, between 150 and 180 bpm. The idea from a game design standpoint is to indicate that this game should be played at a quick pace, running shooting and dodging, taking chances and play offensively. Unfortunately, this intense music does not leave much room for sound effect in the game. Some feedback, especially regarding powerups, is dependent on sound effects to let the player know she's picked them up or engaged them. I generally used sound effect for these that in some way stood out from the onslaught of the music, but if I were to remake the game i would make sure to either leave some space either in the frequency spectrum or to tone down the intensity somewhat. 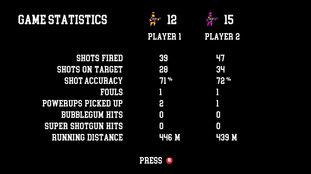 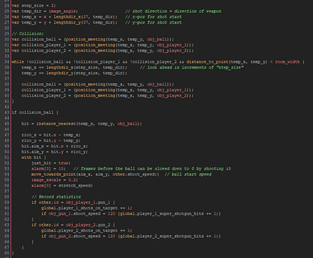 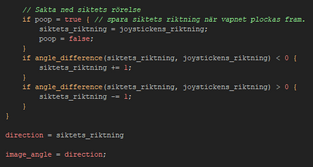 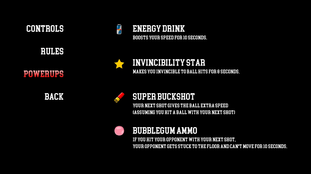