A splitscreen mashup of Bubble Bobble and Lunar Lander, where two players must cooperate in order to land safely.

In this project, my main responsibilities were level design as well as implementing tools made by programmers, such as event listeners for rotating the large lander, playing sounds and vfx when the characters pressed buttons, and triggering different game states.

The gameplay is inspired by games like Regular Human Basketball, where players must use small characters in a platforming environment in order to control a larger contraption.

Level designing for this game meant creating a level that was not too hard for players to navigate, since they don't have much time to move between buttons to control the ship on the other screen, but that also made sure they kept their eyes on both screens at all times, by requiring them to jump and turn to get where they want to go.

At first, we rotated the whole level when the players wanted to turn the lander. Gravity then made them fall down and start running around on the walls instead. This required a level where all platforms could be reached independent of rotation. 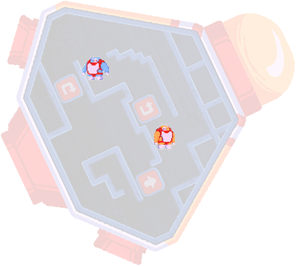 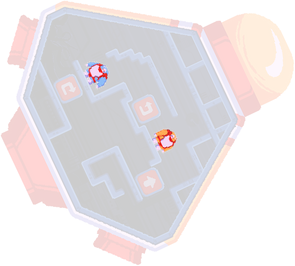 By instead choosing to rotate the camera in the opposite direction of the small lander on the left, we circumvented the problems listed above, while still achieving a similar visual effect and slightly disorienting experience.